Medically reviewed by Lynn Marie Morski, MD, Esq.
Written by Natalie Saunders, B.A., LicAc
4 min read
0 comments
Read Later
The following is for informational purposes only. WayofLeaf does NOT advocate the illegal sale, use, or possession of any psychedelics. Be sure to research, understand, and follow all laws and regulations relating to the use and possession of psychedelics in the state or region you live.

They have become well-known as one of the easiest mushroom varieties to cultivate and are one of the most researched psilocybin-containing species. Furthermore, they come in many shapes and sizes, meaning that growers are spoilt for choice when picking a variety.

This article explains all you need to know about golden cap mushrooms, including their appearance, effects, potency, and history.

In the world of magic mushrooms, golden caps are one of the most famous varieties. They are also known as Psilocybe cubensis, cubes, golden tops, or one of many different strain names (see below). 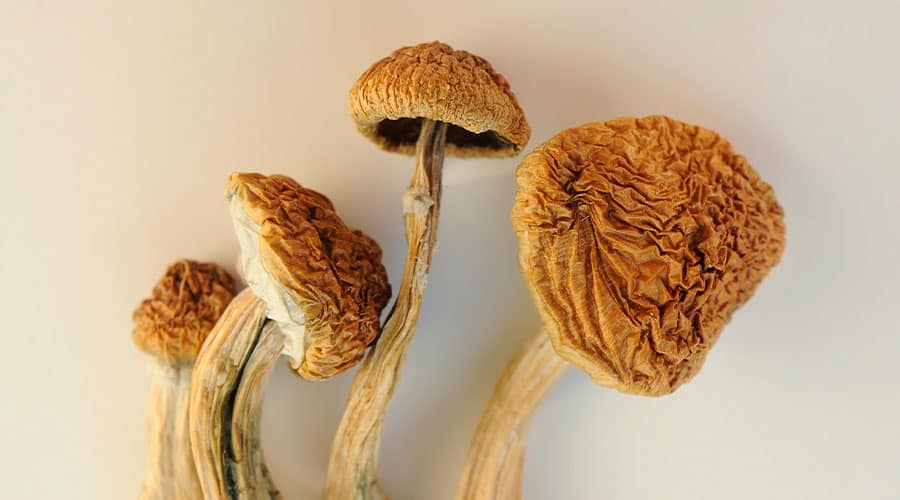 Golden cap mushrooms’ effects are much like those of other magic mushrooms. They include:

They can also cause less pleasant effects in some individuals, especially when taken at high doses. They include:

What Type of Mushroom Are Golden Caps?

Golden caps are part of a large genus of mushrooms known as Psilocybe. The name Psilocybe derives from the Greek psilos, meaning “bald,” and kube, meaning “head.” This refers to the smoothness of these mushrooms’ caps.

Mushrooms in the Psilocybe genus typically produce the psychedelic compound psilocybin and various other bioactive compounds, including psilocin, baeocystin, norbaeocystin, and more.

Golden caps are just one of over 100 mushroom varieties in this genus, and their scientific name is Psilocybe cubensis. The cubensis part of their name derives from Cuba, where they were first officially recorded.

Psilocybe cubensis mushrooms are what mycologists refer to as LBMs or little brown mushrooms. Their caps tend to be a golden, honey-like color, hence the nickname “golden caps.”

Other Psilocybe cubensis characteristics include:

These mushrooms are among the most widely cultivated varieties, but what do golden cap shrooms look like while growing in the wild?

Psilocybe cubensis is coprophilic, meaning it grows on dung. It is found in grassland, growing on the manure of cows or other animals. It prefers warm, humid climates and can be found throughout the southeastern USA as well as Central and South America.

Anyone hoping to forage for these mushrooms should beware of Psilocybe cubensis look-alikes, as some can be deadly. For example, young Galerina specimens can look similar to the untrained eye. These mushrooms contain amatoxins which cause liver damage and are considered one of the most dangerous fungi.

Galerina mushrooms can be distinguished from golden caps by their habit of growing on wood rather than dung. They also have a rusty-brown spore print, very different from the Psilocybe cubensis spore print, which is dark purple-brown.

Although Galerina species are the primary concern, there are many other potentially poisonous imposters. Therefore, individuals seeking golden caps should thoroughly familiarize themselves with these mushrooms’ appearance and learn which potential look-alikes grow in their area.

Growing Psilocybe cubensis at home is a far safer option. Unfortunately, it is currently illegal to do so in most places. However, in most states, Psilocybe cubensis spores are available online and are legal to purchase for microscopy study.

Psilocybe cubensis mushrooms have undergone several reclassifications and name changes over the years.

They were first recorded in Cuba in 1906 by American mycologist Franklin Sumner Earle. At the time, they were named Stropharia cubensis.

A year later, in 1907, they were also identified in Vietnam by the French pharmacist and mycologist Narcisse Theophile Patouillard. This time the mushrooms were named Naematoloma caerulescens.

In 1941, American mycologist William Alphonso Murrill named the species Stropharia cyanescens. It was not placed into the genus Psilocybe until 1949 when German-born Rolf Singer proposed the move.

As we mentioned earlier, there are many varieties of golden cap mushrooms, sometimes referred to as “strains.”

Each of these Psilocybe cubensis varieties has unique characteristics. Some are known for being quick and easy to grow, while others are known for having huge fruits or being extremely potent.

Some of the most popular cubensis strains include:

However, there are many more, and cultivators are creating new varieties all the time.

The Potency of Golden Cap Mushrooms

How strong are golden cap mushrooms? Unfortunately, the answer is not straightforward. Mushrooms are a natural product, and their potency can vary significantly from one specimen to the next. 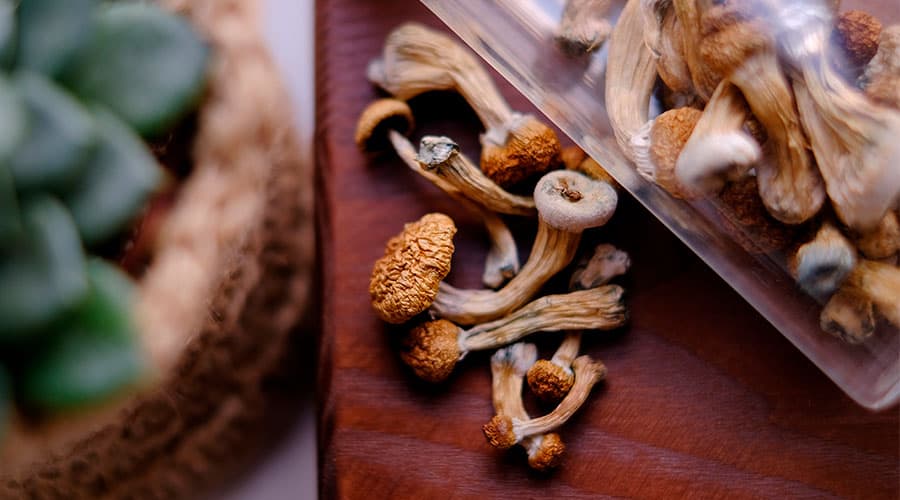 Therefore, an appropriate golden cap mushroom dosage will depend upon the specific variety and the effects one is hoping to achieve.

Understanding the Potency of Magic Mushrooms

In general, Psilocybe cubensis are considered moderately active compared to other magic mushrooms.

How Potency Differs Between Different Types of Mushrooms

The table below illustrates Psilocybe cubensis potency relative to other varieties of magic mushrooms.

Psilocybe cubensis mushrooms, or golden caps, are one of the most famous magic mushroom varieties. They are moderately potent, and many seek them for their psychedelic effects.

However, individuals hoping to pick golden cap mushrooms in the wild should beware of poisonous look-alikes. It may be safer to cultivate these mushrooms at home using a Psilocybe cubensis grow kit or from scratch using a spore print or syringe.

Although the practice is widely illegal, several places have now decriminalized magic mushrooms. Check online to find out the legal status of magic mushrooms in your area.

You can learn more about how to grow Psilocybe cubensis in our in-depth guide, How to Grow Magic Mushrooms.

4 min read
Join The Discussion
TOC
Premium
Your subscription has ended
If you love cannabis and want to support our site, join WayofLeaf Premium today and unlock
Best of all, part of your membership fee will go towards supporting the fight to legalize cannabis.
Sign Up for WoL Premium
Not now
I already have an account
×
Log in to Your Premium Account