Golden teachers are one of the best-known strains of the magic mushroom species Psilocybe cubensis. They are renowned for producing huge fruits, even in suboptimal growing conditions. Therefore, they have become a favorite among cultivators and are a mainstay of spore suppliers worldwide.

Read on for our complete guide to golden teacher magic mushrooms, including their effects, potency, and potential benefits. We will also provide a brief overview of the growing process and explain why they are many mushroom lovers’ go-to strain.

As their name suggests, golden teacher mushrooms have gold to caramel-colored caps with pale, whitish gills. They are slightly conical when young, becoming convex and then flattening with age. Older mushrooms can be stained purple-black as their spores start to drop. The stems are hollow and thicker toward the base. 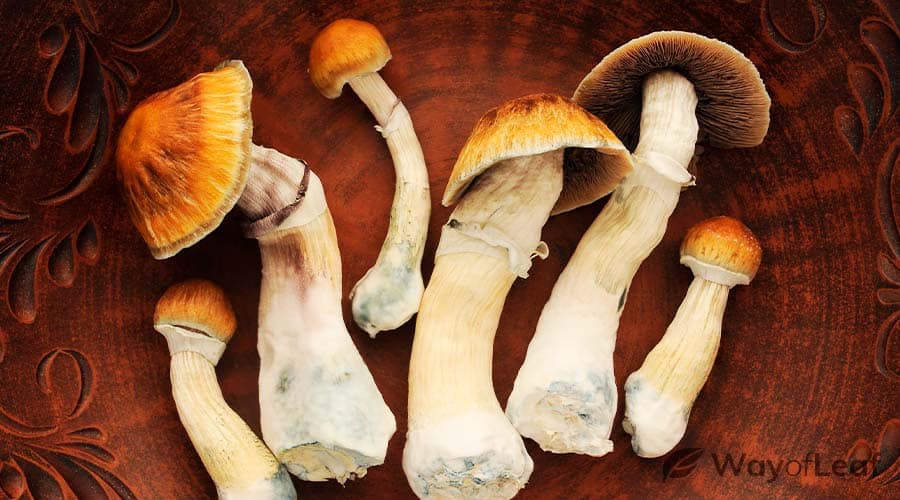 Golden teacher mushrooms are on the large side as far as cubensis strains go. The caps can exceed three inches in diameter, although around two inches is the average. The first flush tends to produce medium-sized fruits, while subsequent flushes can yield much larger mushrooms.

Golden teacher mushrooms do not grow in nature, and wild cubensis mushrooms tend to have smaller and darker caps. However, there are some potentially poisonous look-alikes, so we do not recommend picking these mushrooms in the wild unless you are confident in how to identify them.

So, what are golden teacher mushrooms’ effects, and how do they compare to other cubensis varieties? Let’s take a look.

Like other cubensis strains, golden teachers’ primary active ingredient is psilocybin. The body breaks this chemical down into psilocin, which acts on serotonin receptors to produce its psychedelic effects. It usually takes around 30–60 minutes for the effects to begin, although they can start after as little as 10–20 minutes.

In general, these effects include alterations in mood, sensations, and perception. Some people experience visual effects, such as enhanced colors or shifting geometric patterns. However, visual effects are reported less frequently with golden teachers than with some other mushroom varieties. Most users describe an insightful and spiritual journey, which aligns with the “teacher” part of their name.

Anecdotal reports suggest that side effects such as anxiety and paranoia rarely occur with golden teachers. Furthermore, some state that the overall experience is shorter than average, sometimes lasting just 2–4 hours. For these reasons, golden teachers are sometimes considered an ideal choice for those new to the world of psychedelics.

Of course, other factors also play a crucial role, such as one’s mindset, expectations, and environment. Dosage also has a significant impact on the overall experience. Therefore, it is essential to understand golden teachers’ potency and prepare adequately before ingestion.

Mushrooms are a natural product and can vary significantly in potency from one specimen to the next. Therefore, it isn’t easy to give an accurate figure.

However, golden teacher mushrooms’ potency is generally considered moderate compared to other cubensis strains. For example, strains like penis envy and tidal wave are known for being much stronger.

In terms of psilocybin content, a 2021 review estimated that 1 gram of dried mushrooms contains approximately 10mg of psilocybin. However, the publication did not specify whether this figure applies to Psilocybe cubensis or another species.

There is no standard golden teacher mushrooms dosage because everybody responds differently. Also, as we mentioned, there can be significant variations in potency from one mushroom to the next. Myriad factors can also affect the experience, with dosage being just one part of the equation.

Anyone inexperienced with psychedelics should start at the lower end of the scale to see how golden teacher mushrooms affect them before increasing the dosage.

One of the reasons why golden teacher mushrooms have become so popular is that they are relatively easy to grow. They are one of the less fussy cubensis varieties and will thrive on various substrates and even fruit generously in suboptimal conditions. 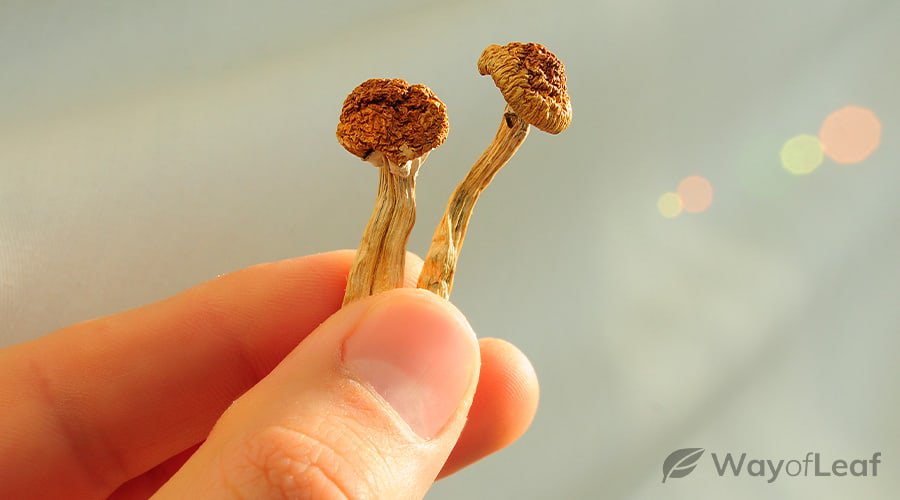 Another common question is when to harvest golden teacher mushrooms. Most cultivators recommend picking the mushrooms as the veil breaks but before the spores drop.

There is a lot of debate in online forums regarding whether allowing mushrooms to spore is harmful. Some comments claim that if the mushrooms begin to drop their spores, it isn’t a major issue aside from being messy and unsightly. Others suggest that allowing the mushrooms to spore signals to the mycelium that the life cycle is over and prevents further flushes.

To be on the safe side, harvest the mushrooms before they drop their spores. Unless you are hoping to take spore prints, of course.

Buying Golden Teacher Mushrooms vs. Growing Your Own

Whether to buy or grow golden teacher mushrooms is a personal decision, with numerous factors to consider.

One is availability. Since psilocybin is still illegal in the majority of places, it can be challenging to find dried golden teacher mushrooms for sale. Therefore, some people have no option other than to grow their own.

Of course, there is also a legal issue here, as magic mushroom cultivation is also prohibited, and the penalties are potentially severe. Spores are available in most states (California, Idaho, and Georgia are the exceptions), although they are only sold for the purpose of microscopy study.

Another consideration is cost. For example, the initial outlay for a growing setup is higher than the cost of buying a gram of mushrooms. Cultivation also involves significant time investment. However, the potential for multiple flushes means that the expense and effort could be worthwhile.

Finally, growing golden teachers is an excellent way to learn about the mushroom life cycle and feel more connected to the mushrooms. It can be a gratifying experience for those committed to increasing their knowledge and developing a new skill.

Golden teacher mushrooms’ benefits are similar to those of other psilocybin-containing mushrooms. Recent research has shown that psilocybin can assist in the treatment of several mental health conditions, including:

However, it is crucial to note that these clinical trials took place under controlled conditions, often as part of an ongoing therapy program.

Taking psilocybin in an uncontrolled recreational setting may increase the risk of adverse effects like anxiety. Therefore, individuals hoping to benefit from psilocybin should search for a trained psychedelic-assisted therapist or guide wherever possible.

As we mentioned, psilocybin and magic mushrooms are illegal throughout most of the United States. However, some jurisdictions have decriminalized personal possession and use, including:

Oregon has gone a step further by decriminalizing all drugs and legalizing psilocybin for medical use. Local drug policies are constantly evolving, so individuals should check online to stay up-to-date with the latest laws in their area.

We remind our readers that psilocybin is currently a federally illegal substance. The information in this article is for educational purposes only, and individuals engage in magic mushroom cultivation and consumption at their own discretion.