Medically reviewed by Lynn Marie Morski, MD, Esq.
Written by Natalie Saunders, B.A., LicAc
3 min read
0 comments
Read Later
The following is for informational purposes only. WayofLeaf does NOT advocate the illegal sale, use, or possession of any psychedelics. Be sure to research, understand, and follow all laws and regulations relating to the use and possession of psychedelics in the state or region you live.

Magic mushroom colors can vary significantly depending on the species. Some are dark brown, some are tan, and others are white. However, one common feature is that many psilocybin-containing mushrooms (the ones generally referred to as “magic” mushrooms) turn blue when damaged.

This bluing reaction is one way to tell magic mushrooms apart from their look-alikes, but what causes it to happen? And, perhaps more importantly, is it a reliable identification method?

This article explains the science behind psychedelic mushrooms turning blue. We will also briefly discuss the chemical reactions that cause blue coloration in other mushroom species. Here’s all you need to know.

Why a Mushroom Turns Blue When Cut

Mushrooms turning blue when damaged is a well-known phenomenon. In fact, some magic mushroom species are even named after shades of blue, for example, Psilocybe cyanescens and Psilocybe azurescens.

Bluing tends to occur when a mushroom is cut or bruised, although it can also develop with age. Many people consider this a key feature of psilocybin mushrooms and use it as an identification tool. However, we have only recently determined what causes the reaction. 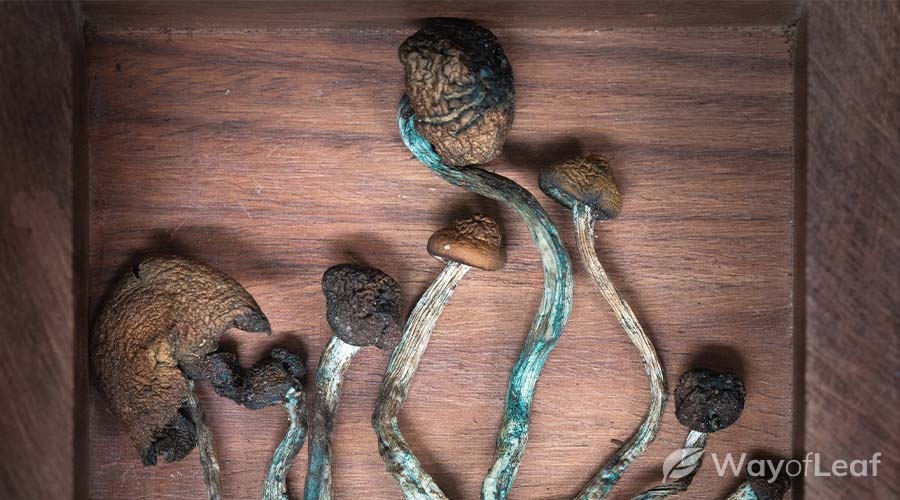 Research published in 2020 answered the question that has been baffling scientists and psychonauts for decades. The team behind the discovery found that Psilocybe cubensis contains two enzymes known as PsiL and PsiP.

It appears that when psilocybin is exposed to oxygen, these enzymes degrade it into multiple compounds known as quinoid psilocyl oligomers. It is these chemicals that are responsible for the distinctive blue coloration. Although the research team only tested P. cubensis, other psilocybin-containing mushrooms presumably undergo the same reactions.

It appears to be the indole component of psilocybin that causes mushrooms to turn blue.

Interestingly, the molecular structure of psilocybin contains an indole group, i.e., a six-membered benzene ring and a five-membered pyrrole ring fused together. This indole group is present in numerous other organic compounds, including the natural pigment indigo. Indigo can be extracted from several different plant species. It produces vivid blue coloring and has been used to dye fabrics for thousands of years.

Therefore, it appears to be the indole component of psilocybin that causes mushrooms to turn blue when exposed to air.

Do All Psilocybe Mushrooms Bruise Blue?

Many people claim that bluing is an excellent way to tell Psilocybe species apart from their look-alikes. However, whether blue bruising is a reliable identification method is debatable.

While most Psilocybe mushrooms turn blue, there could still be confusion. For example, some similar-looking mushrooms, such as Deconica species, can bruise blackish, which could be mistaken for blue. 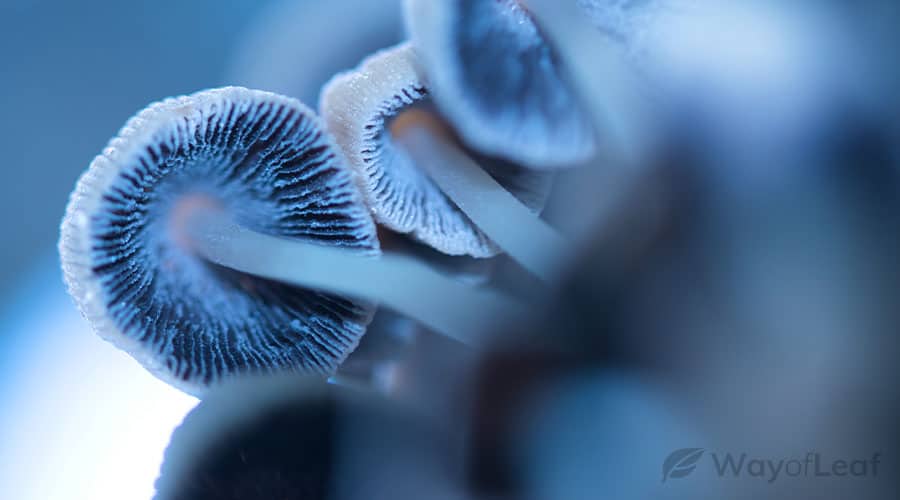 Furthermore, several other varieties of bruised mushrooms can turn blue. The bluing bolete (Gyroporus cyanescens) and several other boletes are prime examples. These mushrooms contain a chemical called variegatic acid that converts to blue quinone methide in the presence of oxygen.

Many of these bolete species are inedible. However, it would be difficult to mistake them for magic mushrooms since their reproductive surfaces have tubes rather than gills. They also tend to be much larger than Psilocybe species.

Bluing reactions should not be solely counted upon as a magic mushroom identification tool.

Another famous blue mushroom is the indigo milk cap (Lactarius indigo), which contains a dark blue compound called azulene. Again, these mushrooms have a very different appearance from Psilocybe species, meaning they should be easy to tell apart.

Therefore, blue bruising can be considered somewhat dependable when identifying magic mushrooms. That said, it should not be solely counted upon as an identification tool. It is essential to use other methods, such as spore prints and microscopy to confirm a mushroom’s edibility, and, in many cases, it is simply not worth the risk.

Blue magic mushrooms may sound like something from a fairy tale, but they are not as fantastical as they seem.

Many Psilocybe mushrooms turn blue when exposed to oxygen by bruising, cutting, or with age. This reaction is due to two enzymes that break down psilocybin into multiple blue-colored compounds called quinoid psilocyl oligomers.

It is unclear why magic mushrooms evolved with this unique feature, but many mycologists use the bluing reaction as an identification tool. However, it is not 100% reliable, and it is inadvisable to consume any mushroom of uncertain identity due to the risk of toxicity.