Medically reviewed by Lynn Marie Morski, MD, Esq.
Written by Martha Allitt
5 min read
0 comments
Read Later
The following is for informational purposes only. WayofLeaf does NOT advocate the illegal sale, use, or possession of any psychedelics. Be sure to research, understand, and follow all laws and regulations relating to the use and possession of psychedelics in the state or region you live.

Magic mushrooms (or shrooms) have been used historically for many years and are used widely today for recreational and spiritual purposes. There are different phases to the shroom trip with different characteristic effects. We will discuss some of the general effects and stages of a mushroom trip and what to do in challenging situations below. First, let’s delve into what magic mushrooms are.

What Is a Shroom Trip, and How Does It Feel?

To begin with, what are magic mushrooms? The term “magic mushrooms” (or shrooms) refers to the broad range of mushroom species that cause psychedelic, mind-altering effects when consumed. The psychoactive chemicals found in shrooms are psilocybin and psilocin. 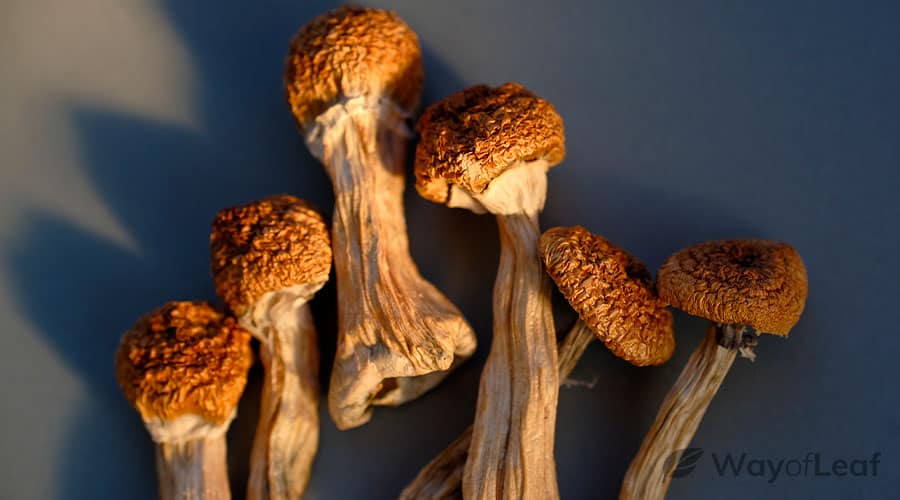 Psychedelic mushrooms are categorized as entheogens, meaning they can produce “mystical-type” or spiritual experiences in people who take them. For example, shrooms have been used for spiritual purposes throughout history by indigenous Mexicans as part of religious ceremonies for many centuries.

Synthetic drugs that contain psilocybin and have similar effects to shrooms include 4-ACO-DMT and 4-HO-MET.

What Are the Effects of Shrooms?

Mental effects of shrooms can include:

Physical effects of shrooms can include:

The total duration of a shroom trip is approximately 6 hours. Here is a breakdown of the different phases during a trip:

The Onset: Up to 2 Hours

The onset of a magic mushroom high is also called the “come-up.” It takes place between half an hour and two hours after taking shrooms.

During the come-up phase, colors typically appear brighter, and the world may appear as if it’s in high definition. People may experience mild hallucinations, and objects may appear as if they are breathing or morphing and have fractal patterns over them. The mind may become less focused, and things may seem funnier than usual.

On the negative side, some people also experience nausea during the come-up phase.

The peak phase is typically two to four hours into the trip and is the stage in which the user experiences the psychedelic effects most strongly. In high doses, people may lose their sense of self and some also have profound spiritual experiences.

At this phase, hallucinations are most prominent. People may have lots of fast-moving geometrical patterns in their visual field and a plethora of intensely bright colors. In high doses, people may lose their sense of self, referred to as “ego-death.” Spiritual experiences are also common during this phase.

The comedown phase is generally between the fourth to the sixth hour of the trip and is when the effects of the shrooms start to fade, becoming more subtle until they wear off entirely.

Following the hours of intense mental stimulation, people may begin to feel mentally tired at this phase. Visual hallucinations start to disappear, and some people may feel a sense of emotional peace.

The afterglow is the ongoing positive good feelings brought about by the trip. It can be felt from several hours up to days once all the effects of the shrooms have entirely worn off.

How Long Does It Take for Shrooms to Hit?

It usually takes around 30-60 minutes for people to begin to feel the effect of shrooms. However, the come-up time is dependent on many different factors. These include:

Different methods of ingestion may make shrooms hit quicker. For example, having shrooms in liquid forms, such as mushroom tea, will make the shrooms hit faster because the dry material of the mushrooms doesn’t need to be broken down in the gut.

Because the amount of time it can take for shrooms to hit is highly variable, sometimes it can take much longer than expected for the effects of the mushrooms to be noticed.

A prolonged onset sometimes makes people think the mushrooms aren’t working, prompting them to consume a second dose. If the effects from the first dose then become apparent, combined with the second dose, the overall effect can end up being much more potent than anticipated.

High doses of mushrooms can be extremely intense and sometimes frightening when unexpected.

High doses of magic mushrooms can be overwhelming, sometimes causing negative effects and a bad trip. It usually is best to wait for at least two hours after taking a dose of shrooms before considering taking any more.

Another point for consideration is that potency is highly variable between different areas of the mushroom. For example, caps tend to have more psilocybin than stems. As such, it’s preferable to grind up mushrooms (e.g., with a blender) and then weigh them out into even doses.

Managing a Challenging Trip on Shrooms

Once shrooms are in your system, there’s no way of getting them out. Sometimes they can cause difficult, scary, and uncomfortable experiences. Since it’s impossible to stop the trip entirely, it’s best to know some ways to navigate a “bad trip” and even turn it into a positive experience. 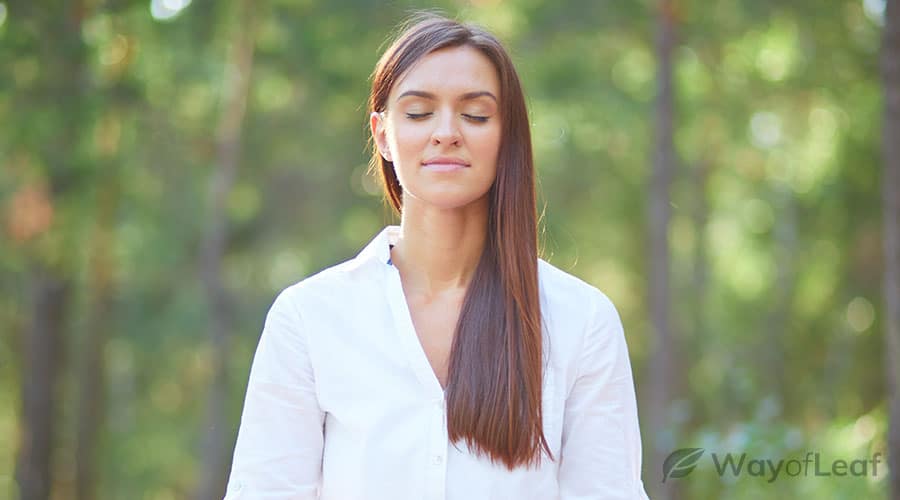 Here are some of our tips to manage difficult experiences with mushrooms:

It’s important to remember that the effects are temporary. Thought will return to normal, and hallucinations will disappear once the shrooms have worn off.

Sometimes on psychedelics, people may feel like they have lost their mind. However, the likelihood of psychosis or a lasting negative psychological effect from shrooms is minimal.

Pay Some Attention to Your Body Needs

Tiredness, hunger, and dehydration can negatively impact mood and contribute to a challenging experience on shrooms. Looking after physical needs can often help people feel better.

It may be challenging to eat while tripping on mushrooms, so it’s best to consume easy-to-eat things like smoothies and soup, which are nutrient-rich.

Sleeping while under the effects of mushrooms may also be difficult, but resting the body and lying down with eyes closed helps some people feel more relaxed.

Some drugs, such as cannabis, might intensify the effects of shrooms, increasing the likelihood of paranoia and confused thought. Taking other substances may also have a dangerous interaction with shrooms and cause physical harm.

The setting (the physical environment in which people take shrooms) plays a significant role in the effects of the drug. Going on a walk or changing one’s physical space can help shift the mood and mindset when on shrooms.

Integration involves talking about and trying to understand a psychedelic experience and decreases the likelihood of long-term negative effects.

Understanding why a challenging experience might have happened on shrooms can help somebody learn more about themselves and be an opportunity for self-growth and healing.

The Shroom Trip: A Summary

The effects of mushrooms are highly variable between different people, but there are typical common effects and effect stages.

The time taken for shrooms to hit and for the effects to fade is also variable, but the trip generally takes place after the first half-hour and lasts up to six hours.

And remember, it’s best to be prepared before embarking on a shroom trip by knowing how to navigate challenging situations.